Fresh Air Fund- an organization that provides children from low income communities in New York City a chance to live with a host family for the summer and enjoy activities that aren’t readily available at home. In fact, the name of the organization stemmed from the term- “A breath of fresh air”

I can remember being as young as 10 years old, going away through the Fresh Air Fund. For three consecutive years, I stayed with a host family in Marlboro, Massachusetts for two weeks during the summer. My “camp sister” and I, were the best of friends. We had a blast during the summer and wrote letters during the school year. When I was about 12 years old, my younger sister came to the exact same family with me since there was also a younger daughter who was her age. They were thick as thieves and we all still communicate today via Facebook! With our host family, our summers were never dull. We experienced things we probably wouldn’t have if it wasn’t for this family. One thing I can credit to this family and Fresh Air Fund is my ability to swim today. Had it not been for daily beach 🏖 and pool trips, I would not have that skill.

I think about the kids I grew up with. Most of them do not know how to swim (If they do, I’m sure they learned because of organizations like FAF) Some that do definitely didn’t learn as kids or by taking lessons. You see growing up in Queens NY, I’ve never heard of such a thing as swimming lessons. I mean I did- but they weren’t popular in our community….in our culture. Why is that? Especially when I can vividly remember as a child going to FarRockaway beach almost every day with a bunch of my cousins (McClendon’s stand up!!) But we went without adults and more importantly, not knowing how to swim! As we got older, those trips turned to Woodmere pool in Inwood- Still without adults and the ability to swim (There were lifeguards present though) Swimming for us was just fun and if we learned, it was a matter of survival…. like someone threw you in the water as a joke and you had to get out!

The drowning statistics of kids- especially babies- are frightening! Swimming has become a life skill that is a necessity! Yet many in minority communities do not know how to swim. With my son, I want to begin to change that stigma. We began lessons when he was two years old and it was a disaster. The first day he was all smiles but once he went under water he got freaked out and so did I. He became afraid of water (swimming) and I did not feel comfortable pushing him at such a young age. Now he is 4 years old and we began lessons again. He is doing remarkably better than before- although there were some tears. This time around, I wasn’t budging. He is learning to swim. It is a necessity- and we are no longer on NY, but in Florida where we are surrounded by water. I’ll be damned if a freak accident were to occur because I as a parent didn’t equip him with the proper skills he needed to survive in a body of water.

My son has been attending lessons four days a week (Monday-Thursday) in only 15 minutes increments. I encourage you to bring your kids out for lessons (contact me for exact location) I am AMAZED at the progress he has made and it is such a beautiful thing to watch him like a little fish in water ♥️

At the end of his first two week session, he earned a certificate for being able to float, kick and . We moved on to next session where he earned another gold star for being able to roll over, float and yell for help. Technically he’s not a swimmer yet but he’s well in his way and is not fearful of water. Soon he will be diving and surfing 🏄🏽‍♂️ lol 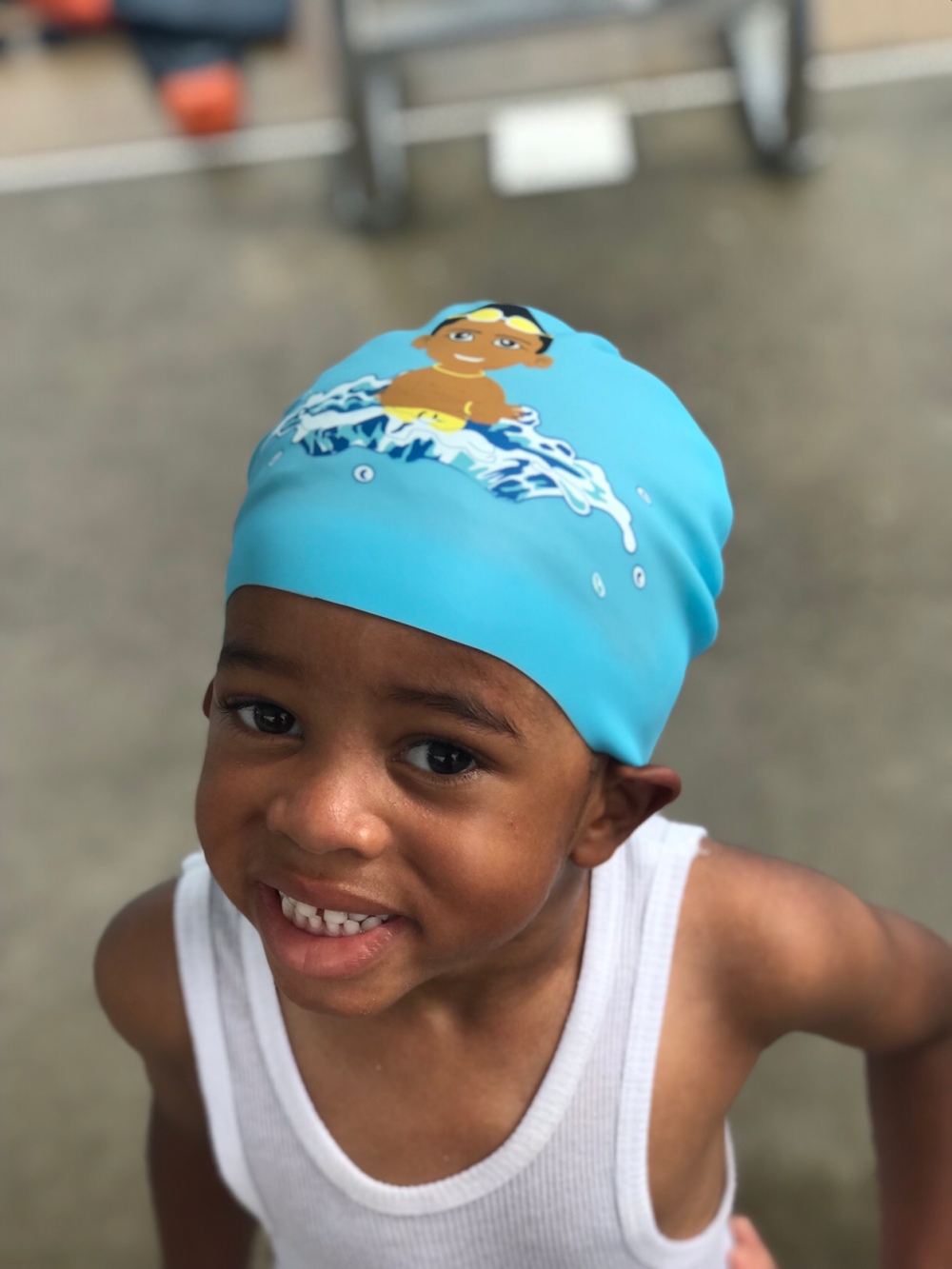 During lessons, he wears a Swimmie cap. Swimmie caps are the first swim caps that feature black and brown kids! Swimmiecaps.com

UPDATE: As I’m reading my Essence Magazine for July/August, the topic of minority’s swimming ranked number 1 on the popular section “10 things we’re talking about”. In fact, Olympian and USA Swimming Ambassador Cullen Jones has awarded nearly half a million dollars to the 2018 Make a Splash Fund to support the cost of free and reduced-cost swimming lessons for more than 16,000 children who would otherwise not be able to afford classes!! How DOPE is that?!

“According to the USA Swimming Foundation, approximately 64 percent of African-American adults and young people are not proficient swimmers. Black children ages 5 to 19 drown at 5.5 times the rate of white children” -Essence Magazine