“I’ve had 4 kids, but this- I cannot help you with”. These were the words spoken to me by my mother, who came down to Florida to watch her second grandson enter this world 🌎 and help me to make a smooth transition into motherhood. This was a new journey for me as a first time mom, and I desperately needed my mom. 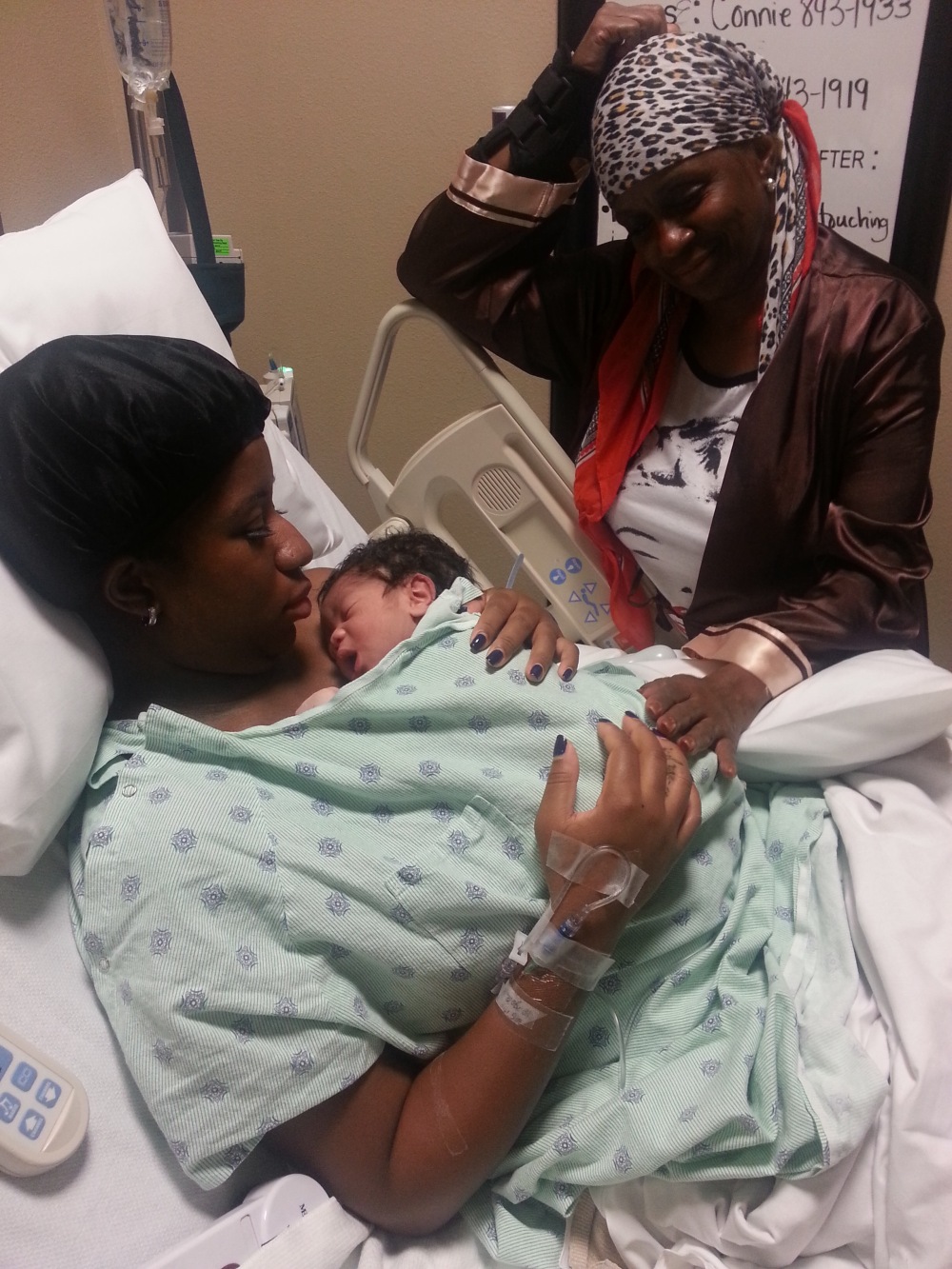 Mommy watches the first hours of me becoming a mommy ♥️

She waited on me hand and foot- from rubbing  my feet before I went into labor, to making meals and doing laundry for a month after my son was born. She basically took care of me while I took care of him (My spouse had gone back to work). There were times when she would just take him from my arms and tell me to go shower, or take a nap. She helped with everything, but one thing- breastfeeding.

My mom had given birth to 4 children and had never breastfed any of them. She said it was just something she never thought about. My grandmother- her mother, had 10 kids and never breastfed. This same woman, a matriarch in my family told my cousin who breastfed a few years before me “Why are you doing that, it’s so old fashioned”

Before my cousin, I hadn’t known anyone personally who breastfed. Upon moving to Florida and developing a relationship with my half-sister, I learned that she had breastfed both my nieces. She was also at the birth of Phoenix and if it hadn’t been for her, I would have never made it. I went on knowing I wanted to attempt to breastfeed so as I’m filling out my paperwork before being induced, the nurses wrote in bold letters NO FORMULA, BREAST MILK ONLY 💪🏾That was the first instance that it became real to me, that I was making a stand and doing what I thought was best for my soon to be born son. I was told a Lactation Specialist would visit my room not long after he was born to help get me started. No one ever showed. My sister was the one who put my son on my breast for the first time.

When we were released and my breast began to ache and swell, she put hot washcloths on my breasts and helped me to express some milk. My mom and I were both amazed. Mommy kept saying “Wow, look what God has allowed your body to do”. In her amazement, I knew she felt a sense of defeat. She was there to help me in any way she could, but as I cried in pain, there was nothing she could do. No advice to offer. No one to tell me to call.

I stuck with it and was blessed to breastfeed my little man into toddlerhood. The the first nights at home were rough. I was at a lost of what to do and how to get him to latch properly. I felt defeated and questioned if this natural process was for me. We eventually saw a Lactation specialist who helped make life so much easier. I attended the support group which let me know I wasn’t alone. When I met with her individually, it was the small things, such as recognizing my triple D breasts were too big for the 24 mm flanges that came with my pump!

Throughout my journey, the people I felt I should have gotten the most support from were the least supportive. “Get him off the titty”, “He’s to big now”, “Are you sure you’re not getting any pleasure from that?!” (Close you’re mouth, because YES, that was actually said to me) Why is it that me, a black woman- didn’t have a village of women who breastfed before me? With 9 aunts and uncles from my moms side of the family, there should have been at least a few. I have had a family member who was pregnant say, “I’m not having my baby sucking on me like a dog”.

Now that I have been through it, I recognize that her statement was made from her being unaware. We didn’t know anything about nursing a baby. About feeding our children the natural way god intended our bodies to do. The system has set us up to fail- offering formula in your take home bag even when you insist- “Take it just in case”.

There was a time when black women fed white babies. We were slaves and forced to feed them. Yes, they knew it was the best thing for their child, they just didn’t want to do it (for many reasons I can speculate) so they got our rich melanated-filled chocolate milk! I have a hypothesis that black women today or maybe in the past fed off that notion. They were forced to do it then so today they want to feel like they have a choice. They want to use their voice in saying “No, I’m not going to breastfeed”, without having a master over their back forcing them to endure the pain of sore, cracked nipples and the sting of the first latch (which was actually a few weeks for me… ouch!) 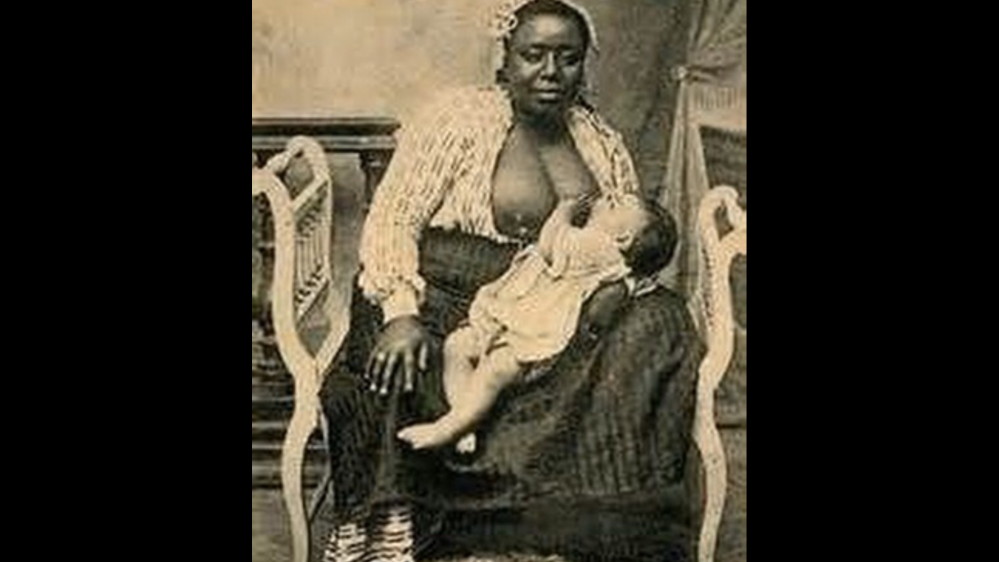 Personally, I did not resonate with that hypothesis. I did have a choice.

I chose to breastfeed my baby and accept whatever changes to my body came along with it.

Chose to accept the pain of engorgement.

Chose to accept not being separated from my baby for long periods of time.

Chose to pump every three hours while back at work.

Chose to go through cluster feeding during his first few days of life.

Chose to wake up every few hours in the middle of the night to put a baby to my breast.

And certainly chose to whip out my breast- with or without a cover, wherever we were to feed my son (and I dare anyone to say anything to me!)

As I breastfed my son for 22 months (before I was forced to stop because of an uneducated physician 👨‍⚕️…a story for another time 🙄) I came across many women who were breastfeeding or had done so in the past- very few of them of my culture. As I went to appointments,  Doctor’s and Nurse’s who found I was still going, made remarks in astonishment- “Wow”, “Impressive”…… As I sat in breastfeeding support groups, I was one of the few, if not the ONLY black woman present. In public places as I walked past fellow nursing mothers (You know when you give each other the look like “Yassssss”),  None of them were black. Where was my culture, my village?

Last photo captured of me breastfeeding Phoenix at 22 months… Yes, in my bridesmaid dress at my sisters wedding!

I am now reading “The big letdown- How medicine, big business and feminism undermine breastfeeding” by Kimberly Seals Allers (Book of the month for March) in which Sellars attempts to understand the cultural and social influences of breastfeeding. I was fortunate to attend a book signing in which Sellars boldly stated, “Women don’t breastfeed, cultures do”

I am with her, I need answers. I need more of fellow queens to breastfeed and breastfeed proudly. I need us to defy stereotypes and do what our bodies are naturally made to do. We need to END The Big Letdown!

Yup, this #ModernDayBlackMama did a nursing photo shoot at 17 months!